We all have different ways of overcoming challenges and we all know the joy service and compassion brings.  But overcoming challenges through service and compassion is something extra special. This is something Becky Anderson knows well. I have been able to watch her and her story continues to grow year by year. She truly has worked to overcome the hard stuff and I believe we can all learn from her.

Related: What Reno Mahe Taught Me about Overcoming Trials

I first met Becky a little over three years ago when she was planning an event for a beloved family friend who was battling cancer. I was also writing an article about it for the local newspaper. Before I met her,  I heard about her – her infectious smile, her happy attitude and her story, her own cancer story.

A few years prior, she got the phone call  – the  unthinkable phone call we all dread after a routine mammogram – irregularities found.  After additional testing she received the news – that she had breast cancer. She sat on her couch, numb from the news, while her two toddler boys played around her. From there, Anderson began a journey that not only changed her life, but the lives of countless others.

It was long after her diagnosis that friends and family started to organize a benefit for her – but they kept it a secret for a quite a long while, mostly because they knew she wouldn’t want to accept the service. When they finally showed her the website they had created for the event, her first thought was to say no to the whole thing.

“I am prideful,” Anderson said with a smile. “But I thought at that moment, ‘Don’t let your pride ruin this moment.’”

So, she went with her second thought, if she let them do this for her, they had to help her do it for someone else. They quickly agreed – mostly because Andersons share everything, she said.

The event they held was a huge success. Friends and family members shaved their heads as a show of support and the event had a children’s corner, an auction and lots of lots of food. They took the great ideas from that event and started planning events for other cancer patients. Things really started to take off, and they decided it would be more successful to start an official non-profit organization and “Anything for a Friend” was born. It’s been six years and they have helped 34 people and are now working on numbers 35 and 36.

A 12-member board selects the service recipients, which can be gut-wrenching to choose. “It is heartbreaking to turn people down. I just can’t stand it,” Anderson said.

One of her biggest reasons for wanting to do the organizing is so people don’t have to reinvent the wheel. Anderson also knows that the money raised most likely won’t make a dent in all the medical expenses incurred, but it’s something more than that.

“The thing is that it is a such a breath of fresh air for families that have been hit with something like this,” Anderson said. “To see the support of the families and friends, they truly know they are loved.”

Related: How Does God Show Tender Mercies in Your Life

Anderson knows what that feels like – because she felt that love herself. Her cancer is currently in remission, but she helped others even while she was still feeling the effects from the disease.

Others Wanted to Jump on Board

Joe Cottam met her when she was just getting started with Anything for a Friend. Cottam runs a family-owned restaurant in Farr West, Utah and was helping with an event. “She  and her sister were still running around with their shaved heads,” Cottam remembers. He admits he was first attracted to the cause because of the name, “Anything for a Friend.” He loves the name and the image it brings. “Since then, I work with them as often as they’ll allow. I love to rub shoulders with people of their character, Christlike character. It’s good for my soul,” Cottam related.

Anderson’s close friend, Kristi Morris, can’t say enough good about Anderson. I watched the two as they planned that event a few years ago and it was special to watch how the two interacted.

Tears flowed down Morris’ cheeks as Anderson talked about some of the many acts of service she has seen over the  years that people have done for their loved ones who have cancer.

“There are so many stories,” Morris said. Then, with emotion, “But this woman is completely amazing.”

She put her arm around Anderson, who talked about some of her personal experiences with her family while she was going through her cancer.

Something More to Learn

“There are moments when you feel all alone, and then you remember the moments when everyone was around you, showing their love for you,” Anderson said. “We are not in pain for pain’s sake; there is something more for us to learn, and we can learn incredible things.”

Related: The story behind “The Cancer Effect.”

Anderson has seen how her service and compassion for others have touched lives, but she also feels and sees the things she has learned not only about herself, but about Jesus Christ and his divine mission. “I do this because it makes my heart sing and I love the stories that make people who they are,” Anderson said. She looks at what she does as an opportunity to fulfill a part of her individual mission and that it honors the special gifts God gave her, which includes her inclination to serve.

As part of Anything for a Friend, the non-profit group holds an annual 5K at Weber State University in Ogden, Utah. The 5K sprang from Tyler Smith, a 15-year-old that waged a full scale battle with an adult liver cancer. His mantra was “Fight to the the Finish” (F2TF) and so the race was born in his honor. Now families who have either lost family members in tragic ways or survivors of tragedy form teams to race. This year there are over 33 teams with 1 to over 100 racers on each team who will participate at the event. I have been more than inspired over the last few weeks as I have read the stories that have been posted on Facebook of the “Trail of Hope Heroes” being honored in the race. Their stories inspire me to be better and to remember that I can get through hard stuff and deal with what comes my way. It also helps me to open my self to write about the hard stuff as their families have. The inspiration others find in their words is worth noting and worth sharing, even though I’m sure it is painful.

The Greatest Example of Overcoming Challenges

Anderson summed it up best when she said:

“When the Creator of all things in heaven and earth was taking part in His own mortal sojourn, He could have chosen to manifest His greatness in any form and could have introduced the Kingdom of God in any fashion, but He chose the lowliest of stables and introduced His Gospel through service.  That cannot be by chance!  He, as in all things, was showing us the “way, the truth, and the life”, showing us the way back to the Father!  Service!” Anderson said. Wow!

As I read that thought she shared with me in an email earlier this week, I felt the truth in her words, kind of like, a “Well of course, that’s right!” moment. “Why didn’t I think of that?” I thought to myself. Well, because I am learning from her gifts. What a blessing for me.

Anderson said she received a blessing on her LDS mission which stated:

‘You will take part in Christ’s burden, bringing small bits of salvation to your brothers and sisters upon the earth.’ At the time, I was considering the field of Social Work and took that as a confirmation about the course that I was choosing and I have felt that blessing and burden within the field, but I had very little awareness what God had in store in terms of Anything for a Friend.  I have felt the some of the most exquisite joy and the most excruciating pain during my service in Anything for a Friend and have come to know parts of the Savior that I did not know before.  That has been the most fulfilling part!” she said with excitement.

Cottam said he sees that attitude with all who work with Anything for a Friend. “They live the teachings of the Savior. They are are willing to mourn with those that mourn, and comfort those that stand in need of comfort. They have done, and continue do so much to ease the burden of so many in their darkest hour,” he said.

That is what Anderson hopes for. “My testimony of the Savior and His unfathomable capacity to “descend below all things, so that He can ascend above all things” has deepened and solidified through my service to those who come by way of Anything for a Friend,” Becky said earlier this week. The lyrics of a 1990’s song, “Window of his Love” often ring in her ears when she thinks of the service she is trying to accomplish for others: “I want to be a window to His love, so when you look at me you will find Him”.

“So, in that way, that is what my testimony of Jesus Christ has to do with Anything for a Friend…it is everything!  I hope that when I die people will want to know more about Christ because they knew me.”

Cottam and everyone else who knows Anderson know that is no problem. “I wonder how she does it. But I know that’s just how she is, and how she lives. She is one of my examples of Christ, and I am honored to call her friend,” he said. I agree wholeheartedly and have no doubt that any of the thousands of lives she has touched feel the exact same way. You meet, you are her friend. You see Christ’s light in her eyes, you feel it in her spirit. It’s the spirit of service and it is catching when you are around her.

Read more about Anything for a Friend and the incredible organization here. To find out how you can help, click here.

What are your challenges to Overcome? Write them down.

Related: Your Story is Enough

Life doesn’t get much harder than a debilitating illness or the loss of loved one, especially gone too soon. We would love to hear your stories of overcoming challenges and what got you through as we know it inspires so many others. Please share in the comments or email us. 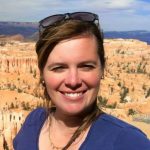