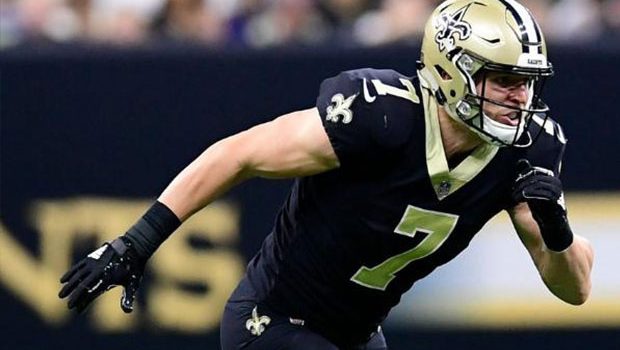 This season as I have watched Taysom Hill quickly become a force to be reckoned with playing for the New Orleans Saints, I have often thought about a conversation I had with him, his wife and  University of Utah Football wide receiver Britain Covey at RootsTech in 2016. It would seem he is not only the “Swiss Army Knife” on the field, but in life in general. I am impressed with the way he and and his family navigate through life with such character and class.  I have to admit I feel pretty star struck that I was able to meet and talk with him at RootsTech for Family Discovery Day a few short years ago. I also have to admit I gloat to my football-adoring husband and children that I got to meet him too! But in all seriousness, I was humbled and pleased to spend a few minutes talking not just about football, but about family history and family storytelling.

The two football players dressed in pressed shirts and ties and didn’t necessarily resemble the brawny men we see on the football field, but showed their softer sides as they talked about their own family stories and the relevance family history has in their lives.

Taysom Hill, a Pocatello, Idaho native, was joined by his wife Emily and the three had a large fan following gathered around the media hub to hear what they had to say. At the time, Taysom was the quarterback for Brigham Young University. He battled back to find great success at BYU after four season-ending injuries. And while football talk wasn’t totally off the table, the rivalry was set aside and the two gentlemen talked candidly about family stories and their importance in their lives.

Taysom and his wife, Emily, have made some goals as a new, young family to tell family stories and make sure their children know where they came from. For Taysom, his season-ending injuries for consecutive years helped put some things into perspective. Both he and Emily said the injuries were extremely difficult. “It was hard to watch him struggle and to know I couldn’t do a lot to help him,” Emily said. “We really decided then to focus on things that were most important and one of those things was setting goals and building our family,” Emily said. Taysom agreed. “I want to make sure I’ve done the things that I would want my kids to do,” he said, adding that he wants to live his life in a way that when his descendants read about him they want to strive to be better.

Just one month after our interview at RootsTech, Taysom’s brother died unexpectedly and he nows wears his brother’s number – “7” on his jersey for the New Orlean Saints and even changed his number his senior year at BYU to “7.”

Taysom’s story of overcoming difficult times to find success both on and off the field is inspiring. He said in a YouTube video about his career that after one of his season-ending injuring the head coach of the San Francisco 49er’s, Jim Harbaugh, called him and gave him good advice – to compete. He told him he wouldn’t be able to compete on the football field right now, but to “compete in life.” So that’s what he did. He competed in the classroom and found success there and then when his body was healed he fought back to a winning season his senior year at BYU and then on to the pros where he was a free agent with both the Green Bay Packers and then the New Orleans Saints. In this, his second year for the Saints, he has been coined the “Mormon Missile” where the third-string quarterback has worn a variety hats playing special teams, quarterback, running back, wide receiver, and defense and has scored two touchdowns this season so far.

And while he’s not afraid to share his talents, his home-centered attitude is apparent after sitting with him for only a few minutes – family is everything for him. And as I have watched Taysom’s amazing NFL seasons,  I am even more impressed with the man behind the uniform – there is much substance there that was felt as we talked family history.

Related: Talking about the hard stuff

The two men said that while they love the game of football, events like RootsTech are a good reminder for everyone to focus on the most important things in life and that is family and religion. “Football is fun. I love it. But the most important things in life happen in other places,” Taysom said.  I think we all will agree. We all be cheering for number 7 on the Saints this Sunday, but not just because we love the game, but we because we respect and admire the man behind the uniform.

Related: Remember Who You Are

Rachel J. Trotter is a senior writer/editor at Evalogue.Life – Tell Your Story. She tells people’s stories and shares hers to encourage others. She loves family storytelling. A graduate of Weber State University, she has had articles featured on LDSLiving.com, Meridian Magazine and Mormon.org. She and her husband Mat have six children and live on the East Bench in Ogden, Utah.

Strengthen bonds and help children be more resilient through intentional conversations. Get our prompts to spark lively discussions and create a culture of storytelling.

Success! Now check your email for our favorite dinner table conversations to spark resilience in youth.