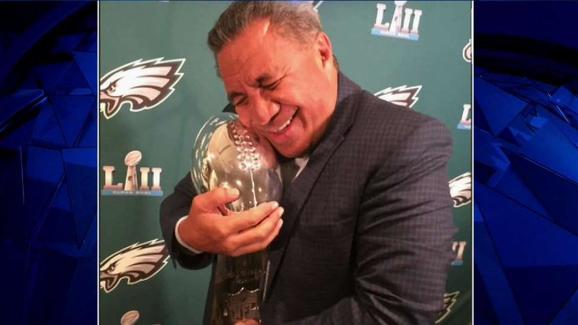 Vai Sikahema takes great pride in his Tongan roots. The former Brigham Young University football star and current news anchor in Philadelphia donned his lava lava and talked lovingly of his family and their stories at RootsTech this year. While he admits he isn’t a “family historian” he does have a deep love for family history and stories. His stories of faith and family helped me to look at my own stories of faith and family.

He and Reno Mahe, another former BYU football player and current running backs coach at the school, spoke to a large crowd at the Family Discovery Day portion of RootsTech in February. The two men also played for the National Football League’s Philadelphia Eagles. I was touched not only by their messages on stage, but as they spoke afterward about topics ranging from family history to angels to spiritual promptings.

Related: What Reno Mahe taught me

Family stories shape us in many ways.

Sheri Dew also joined the duo on stage and proved to be an excellent catalyst to help the two men share their stories and a bit of family history.

Vai was born in Tonga and was raised there. He lived the life of an islander and has fond memories of his days on the island. he mentioned several times he was no expert on  family history, his ability to tell his family stories is a tremendous gift.

Food is a big part of his family traditions. Vai said many Polynesian families spend much of their time in the kitchen gathered around cooking together. He and Reno made some ‘Otai on the stage at RootsTech – a drink made of shredded mangos and coconut with a variety of flavors. As he made the drink he laughed over the notion that they have such big families because everyone is a brother or sister. The reason is that cousin, aunt and uncle are not part of the Polynesian language, making everyone a brother or sister. And it does create a stronger feeling of family unity. “When we come to America we use the words cousins, aunts and uncles to distinguish, but we call everybody aunts and uncles like that,” Vai said.

Education is key in the family.

Vai’s great-great-maternal grandfather was German and came by way of present day Poland, then to Tonga in the 1880s. They married Tongan women. The Wolfgram brothers were known for two things – making bread and beer. Once they joined the LDS church they quit making beer, but kept making bread.

His great-grandfather on his father’s side joined the LDS church in the 1930s. The first Tongan school was established in his home. He showed a picture of him in his 80s wearing a cap and gown, graduating from grammar school alongside his grandchildren.

In the Tongan culture, everything is about giving and sharing with others.  Vai learned through research that his great-great-grandfather had traveled all over. For a Tongan man in that era, it was very unique. He would pull in the tugboats as people got off the big ships to come onto the islands. He was a natural to pull the boats in because he could speak a variety of languages and was  quite friendly, making people feel welcome on the island. In 1906 he pulled in two young LDS elders who were dispatched to look for horses. When Vai’s great great grandfather saw them he knew the elders could help him, so he decided to help them first. He offered for them stay with him and help them find horses as they had been dispatched to do. When they offered to pay him, he refused because Tongan culture does not to accept money for such a thing.

As Vai told the story, emotion filled his voice because of what became of the exchange. When he refused the money, the elders asked what they could do to help his great great grandfather and he asked if they could bring someone to educate the people in his village. They kept their promise. Three months later they returned with a teacher. The teacher stayed in their home for the next year, educating all of them. “That experience has had an effect on the Sikahemas for a number of years because that changed the trajectory of all of our lives,” Vai said. Throughout the years as Vai has been places and done things he has felt his “grandfather’s big hands” on his shoulders telling him, “You can do this. You can get through this,” he said. He believes that others also feel their ancestors’ influence. “That’s the power of knowing your family history, feeling the sense of their presence in our lives,” he said.

Many of his family stories in relation to their faith are very strong as well. When Vai’s mother was a young girl her father was a district president in the LDS church.  In 1947 she, her mother and two younger siblings traveled by boat to another nearby island. They encountered a strong and severe storm on their way home. Their 10-month-old son died of exposure on Tuesday. On Friday there was another round of meetings that required her parents to travel by boat again. Leaders of the church had come to New Zealand for training.  In Tongan culture there are seven days of mourning after the death of a family member with the burial being on the seventh day. Because of their church commitments, they didn’t follow the culture and buried their baby son on Wednesday, only a day after his death. “My grandparents could not contact the leaders of the church to let them know of their family tragedy. They buried their child on Wednesday and they sailed on Friday because they needed to be there for Priesthood training,” he said through tears. Because of this, they lost their standing in the community and were looked down upon, even ostracized. “But they did it because of the church,” Vai said. “But the legacy they left us as grandchildren and children is this. Whenever there is a dilemma between culture and church, always choose the gospel, choose the church,” Vai said. And for him, that is a legacy that he passes down to his children today.

When Vai was just five years old his family traveled to New Zealand to be sealed together in the temple. He remembers a huge group going, first sailing on a boat from Tonga to Fiji, and second flying from Fiji to New Zealand. It was 1967 and the tallest building in Tonga was only about two stories high. “No Tongan (and there were 100 of us) had never been higher than a coconut tree,” he said, remembering the thought. “So here were all these grown men screaming at the top of their lungs, fearful watching the ground get further and further away from their feet,” he said. On the flight, Vai sat across from an elderly woman and she was crying. The mission president, John Groberg, came and sat with her to calm her. She asked him, “Groberg, are we in heaven?” His response after a pause, “Yes, we are in heaven,” came his simple reply.

Vai uses his family’s example of faith in his daily life. 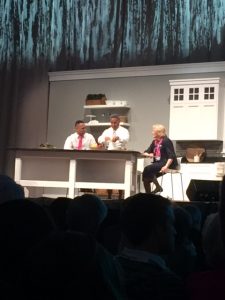 When Vai came to the states he found success as a college football player at BYU and then as pro football player for the Philadelphia Eagles. After his retirement from the NFL, he became a popular newscaster in the Philadelphia market. He also serves as an LDS Stake President for the Cherry Hill New Jersey Stake. Because of his interest in his community and his church, he attended a meeting between church leaders and city leaders when the Philadelphia temple was in early stages of development. City leaders weren’t so sure they wanted the temple in their town and were threatening to take the land back. Vai said things were tense in the meeting and it came to a point where they asked for open comments from anyone in attendance at the meeting. He spoke up and told the crowd his story of his own’s family temple experience when he was 5 years old. The story is a special one to him and he said the spirit was strong in the room when he told the story. “This decision will be the hallmark of your time here at city hall,” Vai remembers telling the city leaders. Months later the city decided the LDS church could keep the land and things would move forward. “I don’t take any credit one way or the other, but I do believe Mayor Nutter may have been the only mayor to make that happen,” Vai said. “And now Moroni oversees the city of Brotherly Love,” Vai said with emotion.

Applying what we’ve learned is key.

For a step by step guide on getting started with genealogy and family history click here to read “The Ultimate Beginner’s Guide to Genealogy.”

Rachel J. Trotter is a writer at Evalogue.Life, where we tell personal and family stories that inspire, and help you tell yours. She has worked as a writer since her college days over 20 years ago. She loves telling people’s stories. She has had stories published on Mormon.org and LDSLiving.com. She loved presenting about family storytelling this year at RootsTech and the Southern California Genealogy Jamboree. She lives in Ogden, Utah and is busy raising six children and loves working on family history alongside her husband, Mat.